Vlog 010: Book to Movie – I Know What You Did Last Summer – On Location Spotlight

In October of 1973 the world was introduced to a group of teenage friends who after partying in the New Mexico Mountains accidentally run over a child returning home from a friends house. With panic and a fear of being arrested the friends never stop; however, do decide to call the cops in hopes of saving the child.

Unfortunately the young David Gregg passes away before the paramedics can transport him to the nearby St Philips hospital.

Ten months later the friends begin receiving eerie messages and phone calls. Someone knows what they did and they want revenge.

The novel, which was written by Lois Duncan targeted young adult readers.

The title I Know What You Did Last Summer.

After the success of Scream, Kevin Williamson was approached to write a screenplay based on the novel. Sticking to his usual formula that made Scream so popular, Williamson penned a script that focused on teenagers using witty banter, suspenseful overtones, and even a few laughs to ease the tension within the theatre.

Over the next two weeks we will be exploring the locations used for the film, I Know What You Did Last Summer, and we will be discussing the differences between both the book and the movie.

To begin this journey we must start in Southport, North Carolina a small southern fishing village as the backdrop for the film. Southport formally Smithville was established in 1792, being named after Ben Smith a cornel in the Centennial Army during the Revolutionary War. In order to promote the town as a major shipping port, Smithville changed its name to Southport, which occurred in 1887. Since 1986 there have been 26 films made in Southport according to IMDb.

This brings us to our first book / movie difference. In the novel written by Lois Duncan the town name is actually never given; however, context clues reveal it is or is a small community located around Albuquerque, New Mexico.

The film, which was written by Williamson, was set in the Southport, NC and intertwined the natural resources located in the area. Like in all Kevin Williamson films, the group of teenagers are extremely self aware, usually finding themselves in situations that they thought were so clever in the stories they had heard or films that they have watched. In the case of, I Know What You Did Last Summer, there are two clues at the beginning of the film, which set up the entire film. First at Dawson’s Beach when the four friends are discussing the urban legend of The Hook and then when Barry remarks, “Lets just pretend he’s some escaped lunatic with a hook for a hand and we’re doing everybody a favor.”

Located on North Howe Street as you drive into the small fishing village is the Amuzu Theatre, which has been a family owned and operated business since 1918. We are first introduced to Helen, Barry, Ray, and Julie here at this location, where Helen is running in the towns Croaker Queen pageant. This brings us to our second novel / movie difference. While Helen did win a beauty queen contest within the book, it wasn’t the Croaker Queen pageant. It was, however, the Channel 5’s Golden Girl contest, where Helen had to submit photos of herself to the station. After winning Helen dropped out of high school to pursue a career as the face of Channel 5.

While the accident in the movie is very similar to the novel there are some slight differences. In the novel Helen, Julie, Barry, and Ray are partying in Cibola National Forest – Silver Springs Picnic Area, which is located near Albuquerque, New Mexico that fateful July night.

Before returning home both Barry and Ray flip a coin to see who would be driving the group home. Barry won the flip, which meant he would be driving the four friends home in Ray’s car. Barry had a lead foot and that night was no different. While Ray and Julie sat in the backseat making out Barry flew through the winding mountain roads when all of a sudden they heard a thud. In a panic and fear of being arrested Barry continued to fly down the road never stopping, while the others protest. When the friends finally reached the interstate Barry pulls off and Ray makes the phone call to the police. Unfortunately the young David Gregg passed away before the paramedics can transport him to the nearby St Philips hospital.

Celebrating Helen’s win as the towns Croaker Queen the three friends travel down to Dawson’s Beach where they drink and party. When they get ready to leave, Helen takes Barry’s keys throwing them to Ray because Barry is drunk. Pissed Barry is reluctant to let Ray drive, however, gets in the back seat in protest. Still wanting to party Barry leans forward, cranks up the music, and then stands out of the sunroof. Losing his grip Barry then drops a bottle of liquor on Ray and Julie who are sitting in the front seat. In that moment of distraction, Ray hits a mysterious man as he crosses the street.

The friends stop, hoping that it was just a deer; however, soon realize that they have hit a human finding a boot with blood running down it. Believing they have just killed a man the four friends decided to do the unthinkable by dumping the body in the water in order to cover up the accident.

As they make their way down the dock, Barry makes the remark, “Lets just pretend he’s some escaped lunatic with a hook for a hand and we’re doing everybody a favor.” – This quote sets up the entire film.

Located on Short Street sits the location used for Julie James’ house. In the film Jennifer Love Hewitt, who at the time was known for her role on Party of Five, played Julie James. When we are first introduced to Julie in the film we learn that she is about to head off to college in order to study law. When the audience reconnects with her the following summer the audience meets a shell of the former bubbly girl.

While the films interpretation of Julie is entertaining in the novel when we first meet the bubbly teen we learn that she is quite the opposite of her own screen counterpart. In the novel, Julie is still a high school student, finishing up her senior year. After the accident, Julie decided to buckle down on her studies, breaking up with Ray and dropping off the cheerleading squad. When we are first introduced to Julie we learn that she has just received her acceptance letter to Smith and is planning to attend in the fall. Everything seems to be on the up and up for her until she receives the dreaded letter, “I Know What You Did Last Summer.”

Also lets take a moment to talk about Mrs. James played by Deborah Hobart in the film. While audiences only get to see Mrs. James briefly in the film, her part in the book has more depth. Like in the film, in the novel, Mrs. James is a single mother her husband dying years prior to the events in the novel/movie. She is also psychic predicting when danger is looming. This ability saves Julie in the novel as she stops Julie from venturing out the night the killer planned to seek his vengeance.

Right down the road from the James House sits Helen Shivers house. Now in the novel Helen didn’t live with her family, because working as the Channel Five Golden Girl gave her the ability to afford a nice apartment in the Four Seasons Apartment Complex. Also in the novel her name is Helen Rivers not Helen Shivers.

In the novel, Helen comes from a working class family and has a ton of siblings. To the outside world Helen might seem vein; however, to those she loves she has an undeniable loyalty, even when they didn’t have it for her.

After working out in Southport Muscle (Fishy Fishy), Barry Cox goes to his locker to find a Polaroid picture of his car parked next to the gym. “I know,” written in black ink under the photo. Furious Barry rips open the locker realizing his jacket is missing. Including his keys. He heads to the front desk, “Who else is here? Anybody else working out?” The front desk manager answers, “Just you and me pal.”

Suddenly Barry hears his car crank up and he jolts through the door beginning to chase his car. The car backs down to the end of the street then stops. Barry catches up to the car, “Max, you’re ******* dead.” He mutters when the headlights of the car come on and start speeding towards Barry. Barry begins to run, then finds himself trapped between the car and a deserted building. The car hesitates for a second then rams into Barry and the building. The car door opens and a man in a slicker steps out of the car walking towards Barry. As Barry screams for help, the fisherman pulls out a large hook admiring his handiwork.

The next day we find Barry in the hospital with Helen, Julie, and Ray discussing what happened the night before. – This is mentioned because it’s one of the only similarities from the novel.

Now fast forward to the end of the film where Barry is finally cornered in the Amuzu Theatre where he is brutally murdered. His fate in the film is a far cry from his fate in the book. In-fact he doesn’t actually die in the novel.

In the novel Barry receives a phone call from a mysterious person claiming to have photographs from the accident the previous year. He is then lured onto the athletic field where he is shot and left for dead. The gunshots muffled by fireworks celebrating the Memorial Day Weekend.

Now a privately owned bar, American Fish Co., was used as the fish house where Julie and Ray talk in the film and where Max is killed. This location has been renovated; however, if you’ve seen the film countless times you will recognize the spot where Ray places his bucket of fish and where Julie runs off.

This location was also used in the 2013 drama, Safe Haven. 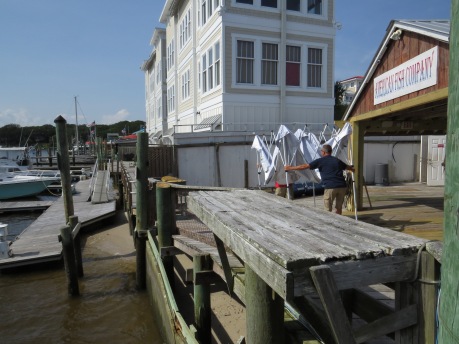